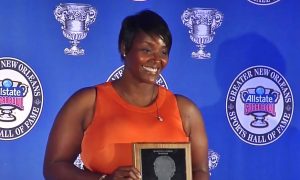 Farris served as head coach of the Patriots for 10 years with a career record of 279-54. Curtis won the state title in 2012 and captured each of the last four championships.

Farris was a standout at St. Martin’s Episcopal and at Tulane and a member of both schools’ halls of fame. She was inducted into the Allstate Sugar Bowl Greater New Orleans Sports Hall of Fame in 2017.

Farris has taken temporary leaves of absence previously to serve as an assistant coach in the WNBA, where he played for 11 seasons for four different teams.

At Stetson, Farris will work under 12-year head coach Lynn Bria, whose teams have won 222 games and made two NCAA Tournament appearances.