Back at Shaw, legendary Tierney ready to help Eagles soar 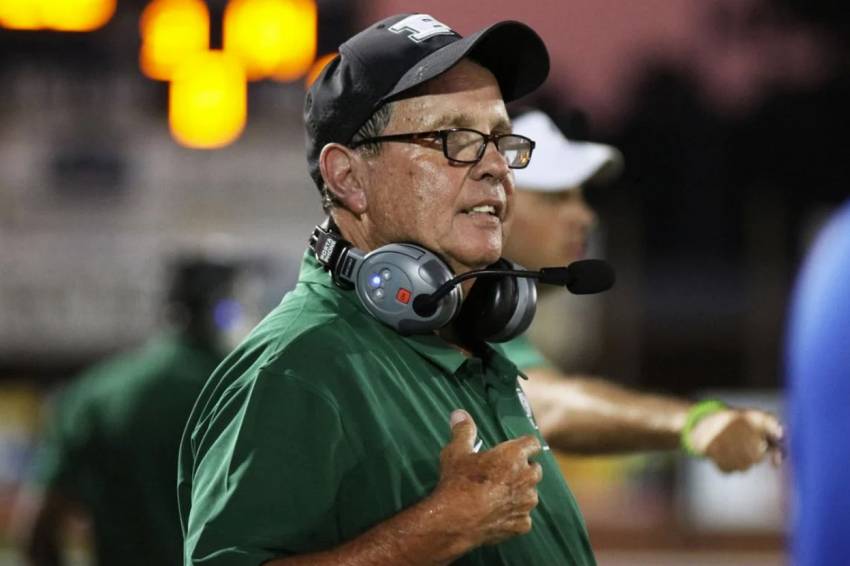 Pigs have not flown and hell has not frozen over.

Virtually no one would have envisioned legendary Archbishop Shaw football coach Hank Tierney ever returning to the school where he made his name and made one of the best programs in Louisiana.

Tierney is now back, roaming the halls of the Marrero school, already having an impact on perception in the community and already helping turn a trend of losing student clientele into gains.

Now, can the future Hall of Fame coach turn the fortunes of the Shaw football program around?

Tierney is in the elite class of Louisiana coaches with 300 wins as he enters the 2022 season.

Shaw has won 19 district titles, including 15 in the storied Catholic League and Tierney was part of every one of those, either as an assistant coach (3) or as a head coach (12) of the Eagles.

The Eagles won two games a year ago and two in 2020 under Tommy Connors. You could see progress, with the talent level slowly improving.

“We were 2-8 at Ponchatoula when our group from last year were freshmen,” Tierney said. “As seniors, they went to the state title game. We just worked and worked to get better. I think Shaw is a similar type of situation.”

Then came an excruciating loss to rival Archbishop Rummel, a game Shaw led most of the way which got away very late as the Raiders scored with 33 seconds left to win.

Injuries set in and there simply was not enough depth to overcome the losses as the losses mounted and no wins followed.

Connors, a Shaw graduate, did an admirable job and has a good future in the game and he is now a coordinator at Holy Cross.

Father Steve Ryan, who has a deep history with the school, made a bold move, reaching out to Tierney, whom he had worked with at the school previously.

While Tierney was poised to retire after leading Ponchatoula to a Class 5A state championship game appearance in 2021, he could not turn down the call.

“Ponchatoula had 1,100, 1,200 boys and a lot of kids to pick from,” Tierney said. “There was a lot of interest because we had been so successful. Everyone wanted to play football. We had tryouts with 150 to 170 kids. Shaw’s enrollment has dropped even though it is coming back up.”

The last winning season for Shaw was in 2009, though the Eagles remained competitive through the 2015 season.

Tierney has already moved the needle by increasing the numbers as he has 73 in the program.

Then, there is the drop from 5A to 4A, from Division I to Division II in the state playoffs, to consider.

“There would be nothing that would please me more than to be able to get Shaw back in the Catholic League,” Tierney said. “I look forward to that day. Honestly, right now, we’re not ready to compete in the Catholic League. I think the move to go do Division II or 4A was a very wise decision by the Shaw administration.”

Tierney also inherited a solid base of front-line talent from Connors, including 14 returning starters.

That includes seven on offense.

“We have a lot of kids returning and they learned while taking their lumps in the Catholic League last year,” Tierney said.

A consummate program player, LaCava is a solid athlete and good two-sport star in baseball as well as football.

At running back, the Eagles have perhaps the fastest player in the metro area in senior David Kency (5-9, 185).

Nicknamed “Mr. Flash,” Kency is a threat to score every time he touches the football.

Kency has run 10.83 in the 100 meter dash, where he is the reigning Catholic League champion.

At wide receiver, talented senior Mike Williams (5-11, 170) returns after tearing his ACL early in the 2021 season.

Williams is simply outstanding and he has recovered and is ready to go. Junior Cameron Bolden (5-11, 160) is also back and gives the Eagles two good receivers for LaCava. The other wide out is sophomore Gavin Richard (5-6, 155).

“Those are the guys we’re counting on,” Tierney said. “David has run 10.8 in the 100 meter dash. I actually think he’s faster than that. Mike was going to be as good a receiver as there was in the area before he got hurt. He’s fully recovered. Jayce was a slot receiver last year. He brings athleticism and toughness to the position.”

The offensive line has size and experience with four starters returning.

“Mike Baiamonte is coaching our offensive line so I am sure those guys will get the job done,” Tierney said. “We are going to run the ball with a quarterback-based, option offense.”

The defense is experienced, with seven starters returning.

“We have nine guys who started games back,” Tierney said. “We played a good Franklinton team in the spring and we were really happy with our defense. Ronald, Jayden and Kilas, those guys all played every game last year. Jerome is a very, very good player and was our leading tackler. Both safeties return and are really good.”

The schedule is intriguing, with Shaw now out of the Catholic League and in Class 4A.

The Eagles open with a blockbuster on September 2 at LaPlace against defending Division III state champion St. Charles Catholic before hosting Kinkaid, Texas.

Then, Tierney renews the great rivalry with Archbishop Rummel for the Megaphone on Sept. 16 at Joe Zimmerman Stadium.

A home game with Bonnabel is followed by the Eagles playing at West Jefferson, another school Tierney served at previously as head coach.

District 10-4A play opens against Landry on October 7 at Shaw before a trip to Belle Chasse. Then comes a non-district game at Paterson before the Eagles close with district games at home against Higgins and Helen Cox.

“The only thing we know is that all title games will be in Caesars Superdome,” Tierney said. “St. Charles Catholic is such a good program. Week three is the Rummel Raiders. That is a great program. That is a big game for us. We could have won it last year. The district is the West Bank district. It’s different but it gives us a chance to have success and to build West Bank rivalries.”

With a legendary coach, with a new classification and district and with experience and improved numbers, do not be surprised to see the Eagles post a winning season for the first time since 2009.

“I don’t think we’re that far away,” Tierney said. “We’re just excited about getting started.”