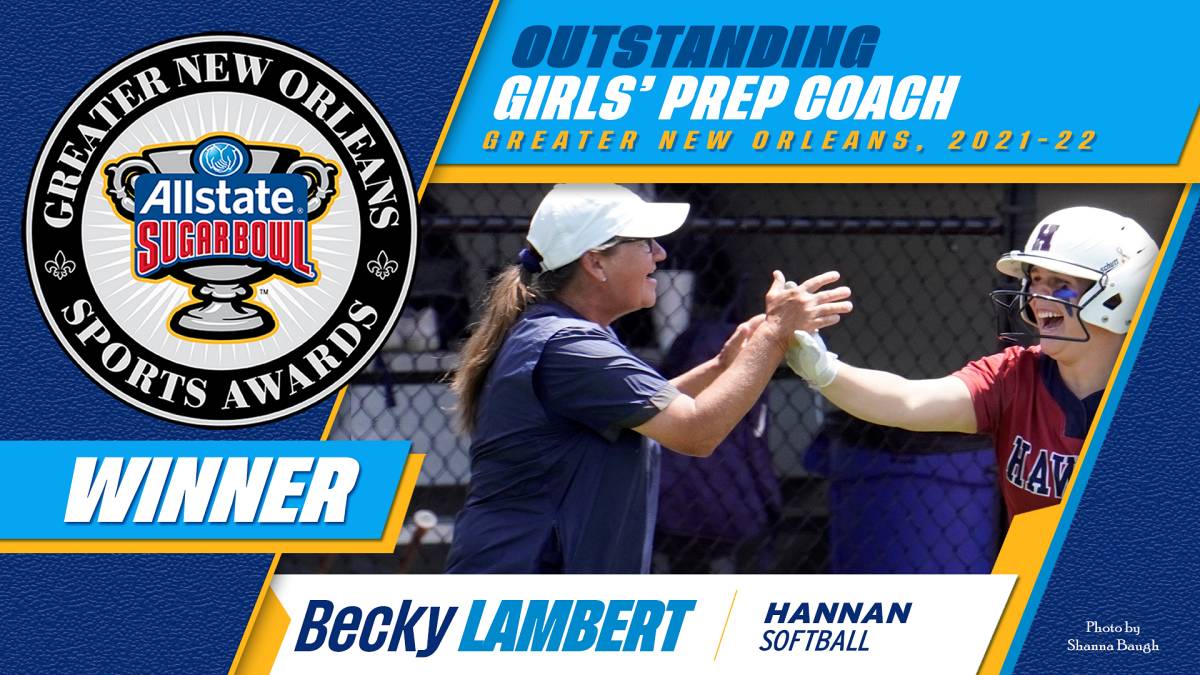 NEW ORLEANS – Becky Lambert has been selected as the Allstate Sugar Bowl’s Greater New Orleans Girls’ Prep Coach of the Year after leading Archbishop Hannan to its third straight softball state championship. The Greater New Orleans Sports Awards Committee, sponsored by the Allstate Sugar Bowl, selects annual award winners in a variety of categories; it also selects Amateur Athletes of the Month and each year’s Hall of Fame class. Overall, 27 individuals and four teams will be honored for their 2021-22 achievements at the Greater New Orleans Sports Hall of Fame Awards Banquet on July 30. Honorees are currently being announced over a month-long period, wrapping up with the Corbett Awards for the top male and female amateur athletes in the state on July 25 and 26.

Lambert directed Hannan, the No. 2 seed, to the LHSAA Division II Softball Championship with a 3-0 victory over top-seeded Haynes. After 10-0 and 9-4 wins in the first two rounds, the Hawks held off No. 3 Vandebilt Catholic, 3-2, in the semifinals. Junior pitcher Tristyn Baugh returned to the mound for the championship game and tossed a no-hitter to lead the Hawks to the title.

“I’m proud of these kids because we never got into our spots until the end of the season,” Lambert said after the championship. “They fought, and they did their jobs. We were battle-tested throughout the season. It paid off today.”

The Hawks (19-11) scored all of their runs in the third inning to upend the Yellowjackets (26-6) in a rematch of last year’s state championship game, also won by Hannan.

“We lost five players from last year’s team and we battled some key injuries, which we’ve done well to avoid in past years,” Lambert said. “These kids stayed together, they practiced hard, they got along. I give a lot of credit to them. They believed in themselves all year long. I thought the season may run out before everything came together, but the last couple of weeks, they gelled and everyone settled in. Then the playoffs hit, and this team flourishes in the playoffs.”

The Greater New Orleans Sports Awards Committee has recognized outstanding high school coaches for the New Orleans area since 1962. This is the first time that Lambert has earned the honor, though her team was recognized as the Outstanding Girls’ Prep Team for New Orleans after winning the state championship in 2011.

The Allstate Sugar Bowl will continue announcing its annual awards tomorrow (Thursday) as the Greater New Orleans Female Athlete of the Year will be released at 10 a.m. (finalists will be announced at 11:30 a.m. today on Twitter (@SugarBowlNola).