His 15-year tenure will end soon – perhaps as soon as this weekend in the Eugene (Oregon) Regional of the NCAA Baseball Tournament.

Or it could end next weekend on the road against the winner of the Knoxville Regional if the third-seeded Tigers are the upset winner in Eugene.

It could even extend to the College World Series in Omaha, Nebraska later this month if LSU goes on an unexpected run.

But it is his last and this post-season performance presents the final opportunity to appreciate Mainieri’s extremely successful and sometimes underappreciated tenure at LSU.

Mainieri, who announced last week that he would be retiring at the end of this season, woke up Monday morning not knowing if he already had coached his last game.

Eventually LSU heard its name called as part of the final four-team regional of the 64-team field announced on the selection show Monday, although the Tigers were not even listed as one of the last four at-large teams. Third-seeded LSU will face second-seeded Gonzaga in their first game of the double-elimination regional at 9 p.m. CST on Friday.

This is LSU’s 12th appearance in the NCAA Tournament in the 14 seasons of Mainieri’s tenure when a tournament has taken place. (The 2020 college baseball season was canceled well before tournament time because of COVID-19.)

But this one is different than the others and it’s not just because it’s Mainieri’s final appearance.

The Tigers usually are a higher seed and usually they play their regional (and often a super regional) in Alex Box Stadium.

In the recent past, the most demanding of LSU fans would see each season as a challenge that would end either with a CWS championship or more evidence that Mainieri should be replaced.

Somewhat more realistic fans would see each season as a challenge that would end either with at least a trip to Omaha or evidence that perhaps Mainieri should be replaced.

But this season is unique. Mainieri is being replaced regardless of what happens in June. The Tigers can go 0-2 this weekend or make it to Omaha or do something in between and it won’t matter.

It’s the end of a very successful era and a new era will soon begin.

Athletic director Scott Woodward, who hit a home run with his first major coaching hire when he recently landed Hall of Famer Kim Mulkey to lead the women’s basketball program, presumably has an impressive list of candidates from which to choose.

Perhaps Mainieri’s successor will restore the Tigers’ program to a level more comparable to Skip Bertman’s historic tenure than Mainieri was able to.

More likely the new coach’s tenure will wind up being in the same ballpark as Mainieri’s – featuring less stressful Memorial Days than Monday’s was, perennial baseball in June and the realistic expectation of periodic trips to Omaha in mid-June.

But nothing is guaranteed.

Mainieri’s lone CWS title in 2009 is five fewer than Bertman had, but one more than the rest of Tigers coaches in history have combined.

Mainieri’s five CWS appearances are six fewer than Bertman had, but three more than the rest of Tigers coaches in history have combined.

It was 20 years ago that Bertman entered the NCAA Tournament having announced his impending retirement. The defending CWS champions fell one win short of a return trip to Omaha when they lost to Tulane in a record-setting super regional at Zephyr Field.

Mainieri never reached the level of success of Bertman, whose five CWS championships are second only to the 10 of USC legend Rod Dedeaux.

But Mainieri leaves as a 2014 inductee of the American Baseball Coaches Association Hall of Fame and the winningest active coach in college baseball.

Whoever succeeds Mainieri won’t be compared to Bertman quite as frequently as Mainieri – or Smoke Laval, who succeeded Bertman and preceded Mainieri – was.

But they will be following one of the most successful coaches in NCAA history. Mainieri, who coached at St. Thomas, Air Force and Notre Dame before arriving at LSU, enters this tournament with 1,501 career wins.

Regardless of how much higher that number goes – or even if it doesn’t increase – these remaining games should be seen as an opportunity to appreciate Mainieri’s impact. 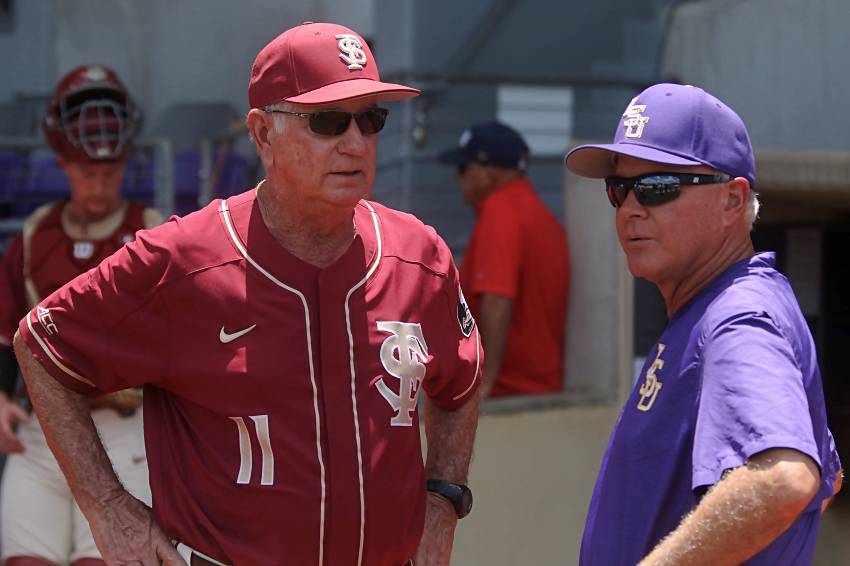 If Tiger fans are looking for a reason for optimism this postseason, look no further than what happened during the last NCAA tournament two years ago.