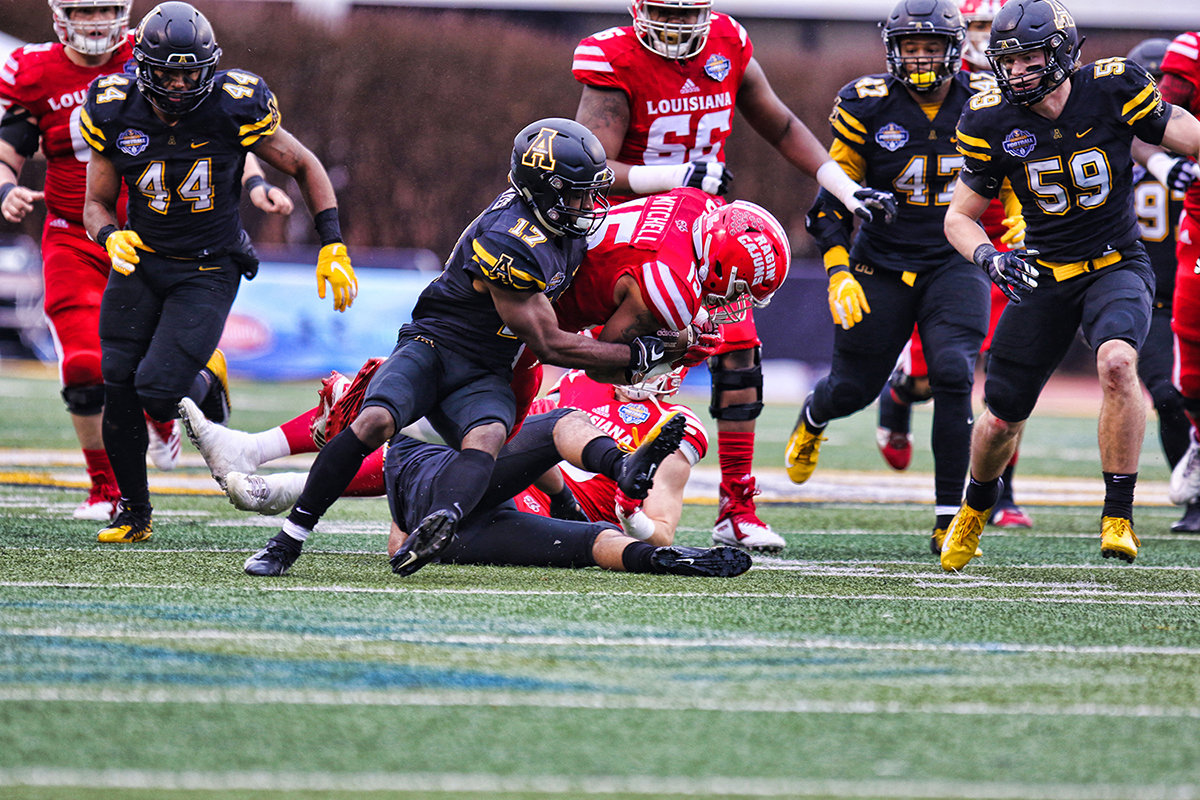 The Mountaineers (10-2, 7-1 Sun Belt) allowed just one touchdown while forcing Louisiana (7-6, 5-3 Sun Belt) to kick four field goals. All three second-half field goals by Appalachian State sophomore placekicker Chandler Staton exceeded 40 yards, including a 43-yarder that pushed the lead to 11 points with 2:09 remaining. The Mountaineers could begin celebrating when junior defensive back Clifton Duck broke up a fourth-down pass with 1:23 remaining in the game.

#SUNBELTFB CHAMPIONSHIP GAME NOTES
• As the winner of the inaugural Sun Belt Football Championship Game, Appalachian State is headed to the 2018 R+L Carriers New Orleans Bowl on Saturday, Dec. 15 at 9:00 p.m. ET/8:00 p.m. CT on ESPN. The Mountaineers are set to face a team from Conference USA at the Mercedes-Benz Superdome.

Team Notes
• Appalachian State wore all black as the home team and Louisiana wore all vermilion (red) as the visiting team.

• On a 21-yard run in the second quarter, Appalachian sophomore running back Darrynton Evans went over 1,000 rushing yards for the season. This marked the seventh-straight season a Mountaineer rusher has eclipsed the 1,000-yard mark. Evans finished the game with 1,079 rushing yards on the season.

• Louisiana senior placekicker Ryan Pfau connected on a career-high four field goals (37, 45, 23 and 24 yards). Pfau entered the game with 10 field goals made in 12 games this season.

• Louisiana won the coin toss and elected to receive. Appalachian opened the game defending the north end zone. The opening kickoff was a touchback.

• Appalachian State junior defensive back Josh Thomas recorded the first interception at the 1:42 mark in the second quarter (1:17 p.m. ET).

About the Sun Belt Conference
Entering the second decade of the new millennium, the Sun Belt Conference continues to challenge itself, and its competitors, in all aspects of intercollegiate athletics. Not content with being simply the youngest football conference in the Football Bowl Subdivision, the conference has shown that it can rise each and every season that comes along. And since the birth of the league as an FBS member in 2001, the evidence is clear that the conference is indeed rising above competitors and peer conferences.

The Sun Belt finished second in bowl winning percentage among all 10 FBS conferences the last two seasons. Reaching back to the 2014 season, no conference has a better total bowl winning percentage (.611) than the Sun Belt. All that success comes as the 2018 season will see the conference split into East and West divisions for the first time and stage its first-ever championship game at the end of the regular season on December 1, 2018.