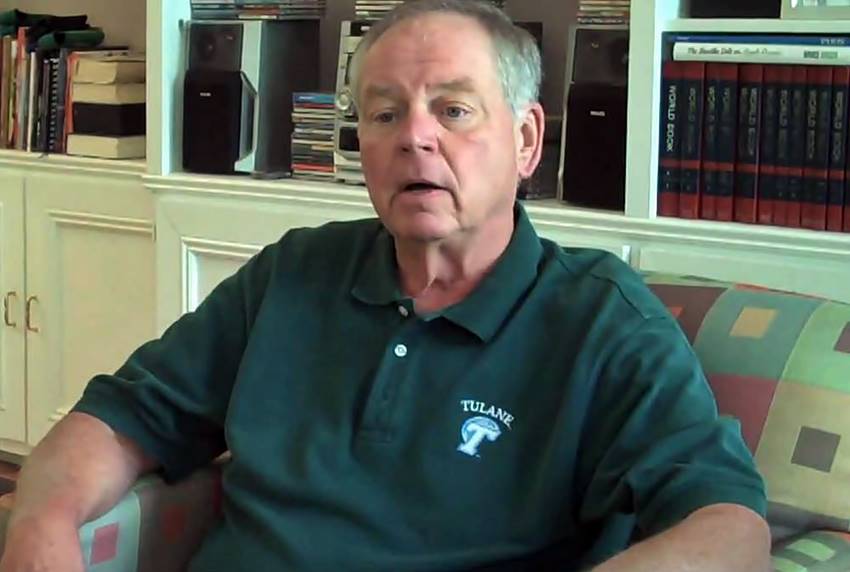 NEW ORLEANS – “So come in, oh Great One, the Sahib of Skepticism, the Viscount of Venom, the Sultan of Sarcasm, Karnak the Magnificent, and give us the questions inside the envelopes. Karnak, the first answer is:

And the question is:

Who is being honored with the Billy Slatten Award at the Tulane Hall of Fame induction ceremony Friday night?

OK, so we stole the Karnak bit from Lind just as he stole it from Johnny Carson.

But what better way to illustrate the connection between Lind, a Tulane alumnus, Green Wave athletics and this award, which is “given to a Tulane affiliate who has shown extraordinary support and commitment to Tulane and its student athletes.”

It was a couple of months ago when Green Wave athletic director Troy Dannen called the retired States-Item and later Times-Picayune columnist.

“We’ve got this Billy Slatten award coming up. Are you familiar with it?” Dannen asked an unsuspecting Lind.

Lind was familiar with the award and immediately started thinking of worthy candidates, which he figured was the purpose of Dannen’s call.

Then Dannen said, “You’re it.”

“You’re getting the award.”

“You’ve got to be kidding me.”

“Troy, I don’t even know what to say,” Lind responded. “I’m certainly not in the financial contribution class of the Slattens. I do my part. I give a small amount every year, but I’m not much of a needle mover.”

But the Slatten Award, Dannen explained, isn’t about money.

“It’s about dedication to the school and what you’ve done for us through the years,” Dannen said.

To understand “the love affair” between Lind and Tulane you have to go back some 70 years to when 5-year-old Angus would pace excitedly on Willow Street on Saturday afternoons in the fall, waiting for his father to finish his shift selling tickets to Green Wave games in old Tulane Stadium.

Lind’s father, also named Angus, was a British customs officer who came from what is now known as Belize. The elder Angus Lind’s pay for his work in the ticket booth was two tickets to the game and he and young Angus would watch Tulane compete as a member of the Southeastern Conference.

“It all started with that,” Lind said.

As special as those fall Saturdays were, they were just one example of how Tulane drew Lind like a magnet.

As a youngster he went to Tulane day camp, which was run primarily by Green Wave football and baseball players, “for five or six years.”

“It was so much fun, Lind said.

He sold soft drinks in Tulane Stadium and was a Boy Scout usher in the stadium as well.

“I did everything you possibly could do,” Lind said.

He and his friends also found their way into the massive arena on less official occasions.

“Tulane was so easy to break into,” Lind said. “As kids we rode our bikes up and down those concourses in Tulane Stadium. We just had a blast. We broke in and watched practice.

“It just continued on. I had such a great time at Tulane.”

As a student he belonged to the now-defunct Beta Theta Pi fraternity, which was kicked off the Tulane campus in the mid-90s for “repeated offenses and stupidity,” Lind explained.

The frat house was on Zimple Street, right next what is now The Boot, but which was then “Eddie Price’s,” named for its owner, one of the greatest Green Wave football players ever.

Lind and his frat buddies and their dates would walk from the frat house to Tulane Stadium, long before the football program abandoned the campus for the Superdome just as it abandoned the SEC for life in the college football wilderness.

“That was one of the most fun things to do,” Lind said of the walk.

There wasn’t tailgating back then because all the pre-game partying took place at frat houses and private residences on Calhoun Street, Audubon Boulevard and other streets in one of New Orleans’ most distinctive neighborhoods.

The Green Wave team and student body at large also had a more distinctive New Orleans flavor than they have nowadays.

“Half the school was from New Orleans, but it’s not like that anymore,” Lind said. “You had players from Warren Easton and Jesuit.”

When Lind graduated from Tulane he began his newspaper career in Meridian, Miss., covering both Archie Manning at Ole Miss and Pete Maravich at LSU.

“Those were terrific times,” Lind said. “A lot of fun. Great start to a career.”

When Lind arrived at the States-Item in 1970 he had already decided that the night hours, weekend and holidays that sports writers worked weren’t in his long-term plans. He covered news – hard news – before becoming a columnist.

Among the more notable stories he covered were the Rault Center fire, the Upstairs Lounge fire, the Howard Johnson’s sniper, the death of Congressman Hale Boggs in a plane crash in Alaska – “all the tragedies”.

He still gravitated toward the sports department where most of his closest friends at the paper worked and where he would “get ragged on pretty good” for remaining loyal to Tulane even through the most difficult seasons.

In 1977 he started writing columns and by the time he retired in 2010 he had written upwards on 6,000 of them, capturing the aspects of New Orleans that were closest to his heart.

There were bars and bartenders, the Fair Grounds and cab drivers – and there was always Tulane.

“I’ve written a lot of columns about the school,” Lind said.

In the late 1970s, with some help from John Jones and Bob Marshall from the sports department, Lind started writing the Karnak column, which was a vehicle for making fun of LSU and Tulane on the occasion of their annual football game.

The initial column, written in the style fashioned by Carson and sidekick Ed McMahon on the old Tonight Show, was a collaborative effort that took place at Robert’s Bar on Calhoun. Later, Bruno’s on Maple Street became the site of the brainstorming, which grew to maybe a couple dozen contributors.

The general idea for the punch lines in the columns was that LSU football players weren’t real smart and Tulane football teams weren’t real good or of much interest.

The inspiration for the columns came not only from the rivalry, which at the time was a really big deal. But also from “refreshments with news sources” as Lind’s expense voucher to the paper read.

“I didn’t send those out,” Lind said. “I’m just saying people latched on to that.”

And Karnak latched on to that spirit.

A: Because he’s overqualified.
Q: Why doesn’t Dan Quayle teach spelling at LSU?

A: Chopsley, Venus de Milo and the Statue of Liberty.
Q: Name three people who move better than Tulane’s quarterbacks

A: Bridgestone-Firestone.
Q: Name the only team to suffer more blowouts than Tulane.

A: I’d like buy a vowel.
Q: What did the LSU player say when asked to spell “cat”.

A: An oil rig, a good fishing spot and Joe Dean.
Q: Name a gashole, a basshole and the athletic director at LSU.

Lind acknowledged that it might be harder to come up with a good Karnak column these. It’s not because Tulane and LSU rarely play in football – the column outlived the annual series – but because right now both programs are doing really well.

“I love the school,” Lind said. “I’m happy to see them having good fortune now with a good coach, a good staff a great AD. It just means a lot to me.”

After Lind retired from the paper he had a part-time gig at Fox 8 – “I really enjoyed that; they treated me great.”

Later he wrote for the Tulanian, which asked him to cover the 2014 opening of Yulman Stadium and the return of football to the Tulane campus.

Now on Saturdays he gets to walk from the on-campus tailgate area over to the stadium, reliving his days as Tulane undergrad.

And now he’s the latest recipient of the prestigious Slatten Award, recognizing a Tulane alumnus who spent so much of his 43-year career recognizing what his school meant to him and his city.

“I’m thrilled,” Lind said. “It’s my school. It was my dad’s school. It means a lot to me. I feel blessed to be recognized by Tulane, never expected it, never thought about it. Had no reason to.”

Come back in, Oh Great One, and read one more envelope.

Who is this year’s winner of the Billy Slatten Award?