To the average fan, the offensive line is the most misunderstood position in all of football.

For an individual who mans a position up front, there is a certain esprit de corps. No one can truly appreciate the challenges of offensive line play like one who has played the position.

Andrew Whitworth has been plying his trade for a very long time. The Rams left tackle is one month shy of joining a geriatric but elite fraternity of offensive linemen who have played in the NFL beyond their 40th birthday. Whitworth’s is December 12th.

The Monroe, La. native has evolved into a standard bearer among NFL linemen. Now is his 16th season the LSU product is four years older than his head coach, Sean McVay.

Big Whit began his NFL journey as a late second round selection in 2006 by the Cincinnati Bengals. He spent 11 seasons in the Queen City before inking a three-year, $ 36 million deal with the Rams in 2017. He recorded 164 starts as a Bengal with 64 more since heading to Los Angeles, slotting him second all time among NFL offensive linemen.

You don’t play left tackle in the NFL because of seniority. You must keep proving you’re good enough to do it. Whitworth did not allow a sack in 2020. He has earned four trips to the Pro Bowl and a pair of first team All-Pro honors. Whitworth has been very good for a very long time.

Let’s look back at some of his peers among the long timer blockers club.

Whitworth helped coach Don Shows capture a pair of state titles (1998, 2000) at West Monroe but as tight end. He was also a tennis champion and a very good golfer.

As a five-star recruit in 2001, Whitworth had a wide selection of college options. He signed with LSU, becoming part of a legendary recruiting class. Along with Whitworth, Marcus Spears, Marquise Hill, Ben Wilkerson and Michael Clayton inked with the Tigers in 2001 and became the building blocks for the 2003 BCS title run. 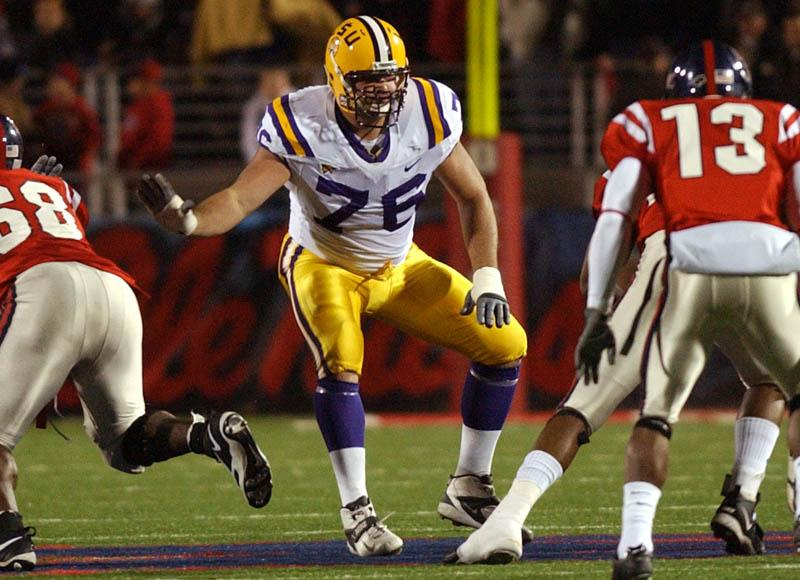 As someone who also gives back to the community, Whitworth has donated $250,000 to Los Angeles Regional Food Bank during COVID. He hosts a fund raising golf tournament in Louisiana for his Big Whit 77 Foundation.

Here’s a fun not from his long pro career. He caught a one yard touchdown pass from Carson Palmer while with the Bengals on his 29th birthday on Dec. 12, 2010). Maybe he’ll become the first offensive lineman in the league to catch touchdowns more than a decade apart.

Whitworth’s focus this season is winning his first Super Bowl ring. He follows a grueling training schedule to keep his body toned and still has significant gas left in the tank.

Match tells us Whitworth would have to play another three-plus seasons in order to overtake Matthews’ 293 start total. If he chose to try, I wouldn’t bet against him.