Amite shuts down Many to take Class 2A state championship, 17-6 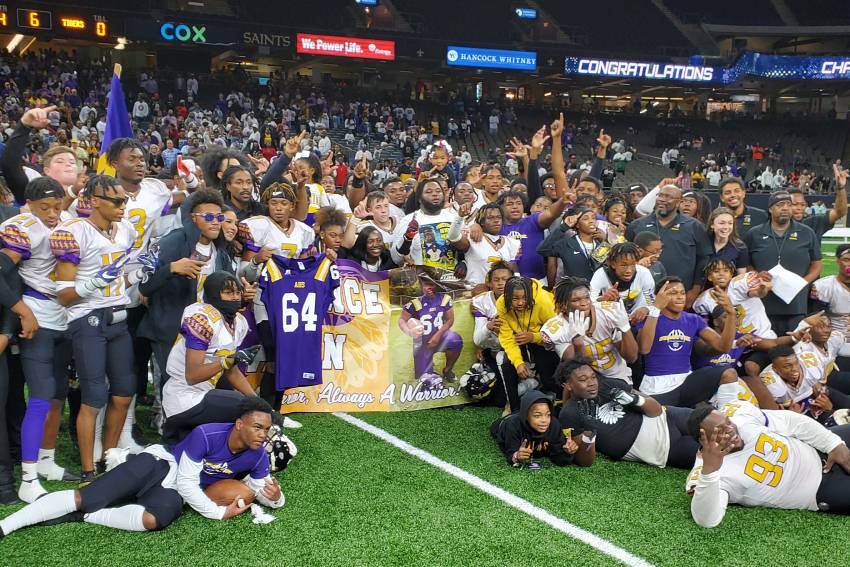 NEW ORLEANS – The top-seeded Many Tigers were never held under 30 points in a game all season. In the Caesars Superdome, the defending Class 2A champions only put one score on the board as the No. 6 seed Amite Warriors physically dominated in a 17-6 win Friday afternoon.

The Warriors had to hold off a belated rally attempt as Many got on the board with 6:30 left on a London Williams 16-yard run. An ensuing onside kick recovery by Garret Culverson gave the Tigers new life but Amite’s defense rose to the occasion.

On fourth down, Williams was stopped attempting to string out a toss to the right side by Ja’Marion Dunomes and Ashton Terrell. That was the last hope Many had as the Warriors held for most of the remainder of the clock to preserve their sixth state title in school history.

Amite exacted revenge after the Tigers defeated them 34-30 in the 2020 quarterfinals on a game that was broadcast on crescentcitysports.com.

Ashton Wilson earned Most Outstanding Player for Amite. Wilson was in on 17 tackles including two for loss on the afternoon.

The Tigers looked in great position to score first as they got to a first and goal situation at the 7-yard line. The next play was a touchdown run by Jeremiah James but it was called back due to a holding penalty. A subsequent 29-yard field goal attempt was wide right.

Amite capitalized on short fields for their first two scores. The first was a 34-yard field goal by Llam Adamson that put the Warriors ahead 3-0 heading into the halftime locker room. It was set up after just a 17-yard punt landed at the Many 26.

The first touchdown drive encompassed six plays and covered 45 yards. Jalen Robinson had two carries for 37 yards on the drive including a 17-yard score to put the Warriors ahead 10-0.

Many came up with what looked to be a critical stop as they held Amite to a 44-yard field goal attempt that missed. But a roughing the kicker was called which gave the Warriors a fresh set of downs. Two plays later, the Warriors found the end zone on a run by Earl Jackson.

Williams was name the Outstanding Player for Many after he battled his way to 101 yards rushing and a touchdown.

Many outgained Amite 211-153 and possessed the ball for 28:32 to the Warriors’ 19:28. However, Amite was hue on third down as they held the Tigers to just one conversion in 12 attempts.