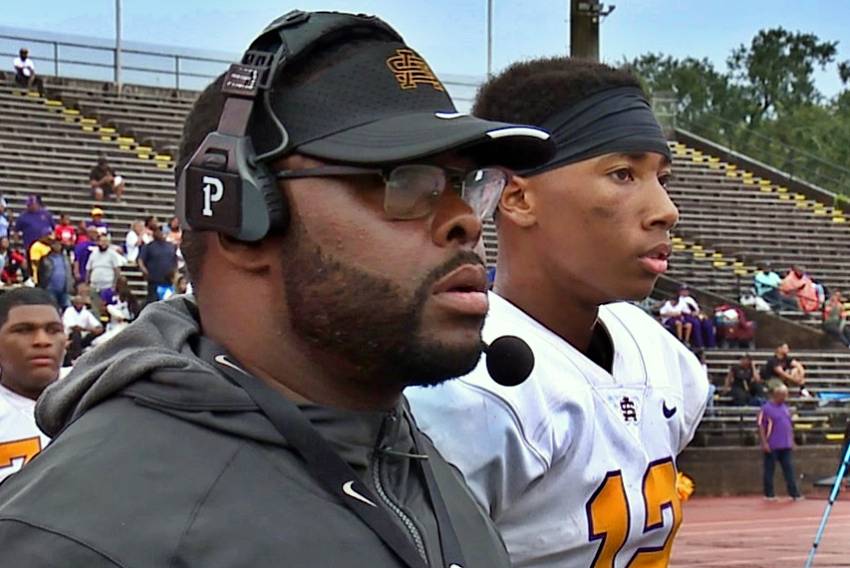 When junior starter Dawson Simmons went down with an injury at the Nike Classic against DeSoto High of Texas, the man he narrowly edged out for the job after a preseason competition, junior Amare’ Cooper, started against McDonogh 35.

Since then, Cooper has been sharp with impressive performances in victories over the Roneagles (36-7) and L. B. Landry (35-0).

“It’s like thunder and lightning,” says Foster, the second-year Purple Knights head coach. “Simmons is blessed with intangibles, agility and speed. Cooper is poised in the pocket, goes through progressions and can throw the deep-ball. His arm strength and accuracy are impressive.”

During Simmons’ absence, Cooper has been the epitome of efficiency, completing 9-of-15 passes for 216 yards and four touchdowns against arch-rival 35. His four scoring tosses went to four different receivers.

As an assistant at Edna Karr, Foster worked with a succession of championship-level quarterbacks like Alden Clark, Leonard Kelly and Skylar Perry. He says Cooper’s ability ranks with that group.

“Intelligent on the field and in the building. He’s a 4.0 student in the class and is just a leader, the type of kid who won’t just walk past trash on the floor. Little things like that.”

Amare’ is a transfer from Archbishop Rummel where he was listed as a linebacker. Quarterback was his position during his playground or park-ball days. He’s blunt in his assessment of what you’ll see the first time you set eyes on Amare Cooper.

“You are going to see a lot of passes. You won’t see me run too much but if I have to I’ll get out of the pocket. The key is knowing when to leave the pocket,” Cooper stated.

Up next for the 2-0 Purple Knights are the powerful Zachary Broncos, also 2-0 on the season and winners of four of the last seven Class 5A State Championships.

The Broncos, 40-21 winners last week over John Curtis, are led by Eli Holstein. One of the top quarterback prospects in the nation, Holstein is an Alabama commitment.

Cooper has a great deal of respect for his counterpart. He’s also confident in his side.

“I think we’ll win. Their quarterback is a big guy, big frame. But we have a really good defensive line so I think they can take him down.”

This season marks the third straight in which the Purple Knights and the Broncos will clash on the field. Both previous meetings have been shootouts. Zachary won in 2020, 42-31. Last season, in New Orleans, it was 42-35 Zachary in a back-and-forth affair.

“We hope to keep this series going because I think it’s really good for both programs. ‘Coach Brew’ and I are friends and he has always taught me a lot about being a head coach.”

Competition, friendship and education between these two programs resumes Friday.