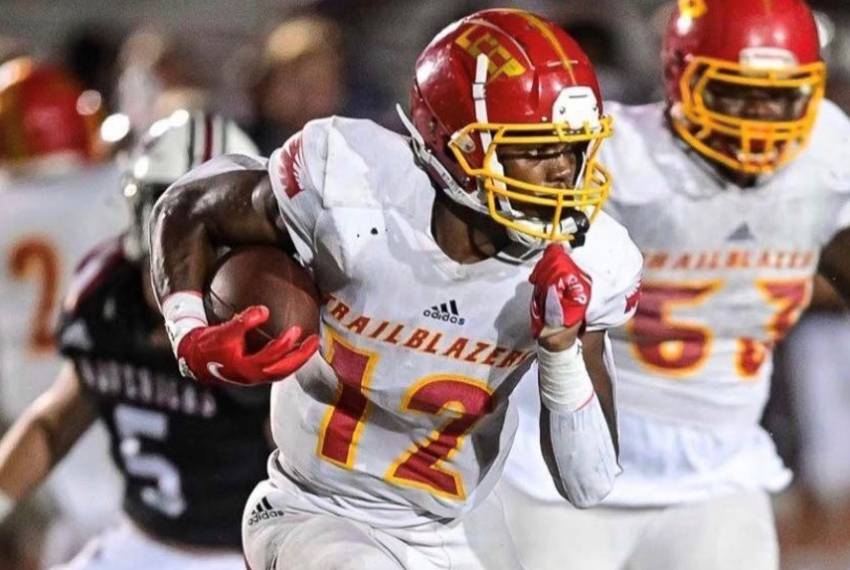 This year’s matchup features an abundance of possible future NFL talent. There is a Louisiana flavor to the game.

LSU signees have really opened eyes this week during workouts. First and foremost, defensive end Quency Wiggins out of Madison Prep has seen his stock skyrocket. He possesses all of the physical tools to be a standout in the SEC. At 6-foot-6 and 273 pounds, Wiggins is lightning quick out of his stance, with surprising balance.

If you consider that he has only been playing football since his junior year, having focused on the basketball court previously, he looks to have tremendous, untapped potential. Wiggins has demonstrated a trace of dominance throughout this week’s workouts in San Antonio. Wiggins resembles former LSU defensive end Marquise Hill, but at this stage, he reminds me of a young Marcus Davenport, the Saints defensive end, in his formative years at UTSA.

Demario Tolan (6-2, 220) has flashed his highly impressive skills during All American drills. Onlookers have commented that the linebacker with 4.55 speed displays the potential which could earn him early opportunities for the Tigers this fall. His athleticism jumps out and he closes on a play with the quickness of a safety.

Tolan squats 435 pounds and has a 31″ vertical. His basketball background and participation in the 110-meter hurdles has given the Orlando, Fla. product the makings of an outstanding linebacker.

Jordan Allen (5-11, 182), three-star LSU signee out of Lafayette Christian nicknamed “Lockdown,” is good in press coverage, transitions well in the secondary and has represented himself well in this week’s drills against top flight competition. With his 10.94 100-meter speed, he seems to have justified all of the hype that has followed him to this week’s game. Allen could line up at either cornerback or safety. Frank Wilson was very instrumental in him signing with LSU. Penn State, Miami, Georgia, Ole Miss and Florida hold Allen in high regard.

Lake Charles College Prep standout running back Trevonte Citizen (6-0, 217) will also be playing in the all star tilt. The one-time pledge to LSU re-opened the process November 28th. He is not expected to make his final decision known until signing day February 2nd. Florida and Auburn are LSU’s closest competition, although Miami, Michigan State and Texas A&M are trying to make an impression. Citizen favors the physical running style of Saquon Barkley.

Trevor Etienne (5-9, 218) from Jennings High is set to make his proclamation during the game. Florida appears to be the frontrunner with senior running backs Dameon Pierce and Malik Davis departing. Auburn could be the darkhorse in the race. Clemson and LSU are also in the mix. Etienne calls it “40 year decision.” His brother Travis was a Clemson star and now plays for the Jacksonville Jaguars.

Warren Easton lineman Malachi Preciado (6-2, 285) is headed to Purdue. He throws the shot put 41’7″, the discus 114 ” and the javelin over 100 feet. Rated the 10th best center in the ’22 class, Preciado was team captain for the Eagles this season. He maintains a 3.8 GPA and admires NFL center Jason Kelce.

Ascension Catholic defensive end J’Mond Tapp (6-3, 251) will play for the Texas Longhorns. The four-star talent with 4.68 speed has strong hands, an attacking style and keeps blockers off balance. Tapp seems most comfortable in a two-point stance with a quick burst off the line. He runs both the 200 and 400 meters along with throwing the shot put. He squats 505 pounds.

Kendrick Law will show his talent on Saturday. The Captain Shreve star can play a variety of roles as a running back, wide receiver, safety or cornerback. With 4.44 speed. the specimen is powerfully built. Law (5-11, 190) has signed to play at Alabama. He has run a wind-aided 10.48 hundred meters.

Tight end Jake Johnson, younger brother of former LSU quarterback Max Johnson who is now at Texas A&M, will join his older brother with the Aggies after having originally pledged to the Tigers. Although he was invited to the game, he has declined.

Two notable running backs on the national level – Raleek Brown and Nicholas Singleton – may grab much of the game day attention.

Brown (5-8, 185), a five star out of Mater Dei (California), is headed to USC. They are already calling him the next Reggie Bush. TA one-time pledge to Oklahoma prior to Lincoln Riley’s move out west, Brown compiled 1,062 yards rushing in 2021, averaging 8 yards per carry with 12 touchdowns. He is a big play weapon.

Singleton (6-0, 215), the National Gatorade Player of the Year will also be in attendance. He has signed with Penn State. The Reading, Pa. native is a violent runner who totaled 2,043 yards rushing with 44 touchdowns. He added two additional scores as a receiver and still another on a kick return. A combination of speed and sheer power, Singleton runs a 4.54 with a 37.6″ vertical and bench presses 355 pounds.