TUSCALOOSA, Ala. – The shorthanded LSU Tigers, downed 13, rallied to tie and then had a shot at the buzzer to potentially send the game into overtime before falling to Alabama, 70-67, Wednesday night at Coleman Coliseum.

The Tigers trailed 57-44 at the 7:51 second half media timeout after a potential LSU lay in was erased on a potentially goaltended block by Alabama. On the other end, Jaden Shackelford was fouled. The LSU bench was also assessed a technical and the four free throws gave Alabama its biggest lead of the game.

LSU, playing without Xavier Pinson, who did not dress for the third straight game, 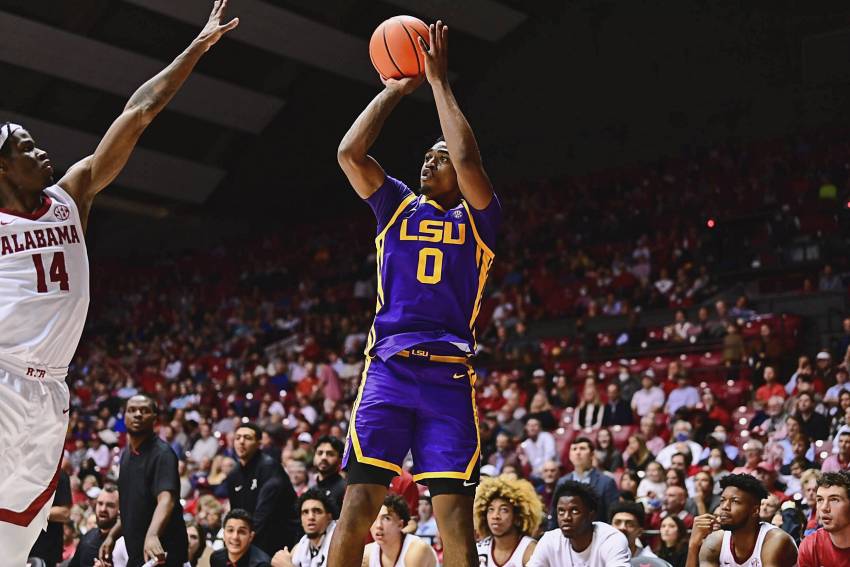 and Darius Days, who turned an ankle late in the first half and did not return to the floor, refused to surrender.

Eric Gaines hit three straight three pointers to cut the margin to four, 57-53, at the 5:41 mark. Alabama made one free throw to push the lead to five. Brandon Murray got in on the three-point barrage and made the Alabama lead just two 58-56 with 5:18 to play.

Alabama missed a shot and Eason was fouled. He made both free throws and LSU had tied the game at 58-58 on a 14-1 run.

LSU was forced to foul and Keon Ellis made two free throws to make it 70-67. LSU’s Eric Gaines got off a long three-pointer at the buzzer that could have tied the game but was wide left allowing Alabama to escape with the win.

Eason finished with 26 points in 30 minutes, hitting 9-of-13 from the field, including both trey attempts, and 6-of-10 from the free throw lines. He had his fifth double-double of the season with 10 rebounds. Murray hit three treys as part of a 19 point, 6 rebound evening. Mwani Wilkinson did not score but had three steals and four blocks for LSU.

Shackelford matched Eason in points with 26, hitting 7-of-18 field goals with three treys and 9-of-11 at the line. Jahvon Quinerly had 17 points with Ellis adding 12.

The Tigers are next scheduled to play on Saturday at 5 p.m. in Thompson-Boling Arena in Knoxville against the University of Tennessee. LSU is back at home on Wednesday, Jan. 26, against Texas A&M.

Coach Will Wade’s Opening Zoom Statement:
“Look, I’m really proud of our guys. We’ve obviously got to clean up the turnovers and the defensive rebounding, but to come in here and battle like this when we’re not at full strength was good to see. When we get everybody back healthy, it’s going to be tough on opponents. I’m really proud of our guys. I’m really pleased with how they fought tonight. We got to go back and clean some stuff up we got to get some guys healthy and we’ll figure it out. But proud of our effort under the circumstances we had tonight. It was very impressive. We got the right stuff. We’re unbreakable. Great toughness. I’m as proud of our team as I’ve been all year and that includes all the wins we’ve had. We’re going to get our guys as healthy as we can, go to Knoxville and fight our [butts] off again on Saturday night.”