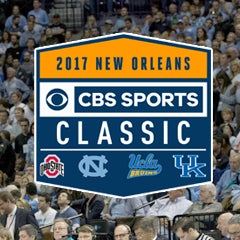 NEW ORLEANS – Game times are set for the fourth annual CBS Sports Classic, scheduled for Dec. 23 at Smoothie King Center in New Orleans. Ohio State and North Carolina will tip off at 12:30 p.m. CT, followed by Kentucky and UCLA at 3 p.m. Both games will be broadcast by CBS Sports.

Three of the four programs have enjoyed success in The Big Easy – both Kentucky and Ohio State advanced to the 2012 Final Four, with the Wildcats winning the national championship that year. North Carolina has also won two national titles in New Orleans (1982, 1993). New Orleans has also been kind to the Buckeyes’ football team; Ohio State knocked off Alabama in the semifinals of the College Football Playoff en route to the 2015 national championship.

Kentucky, North Carolina and UCLA appear in CBS Sports’ early top-20 rankings and, along with Ohio State, welcome top-25 recruiting classes to their respective campuses for the 2017-18 season.