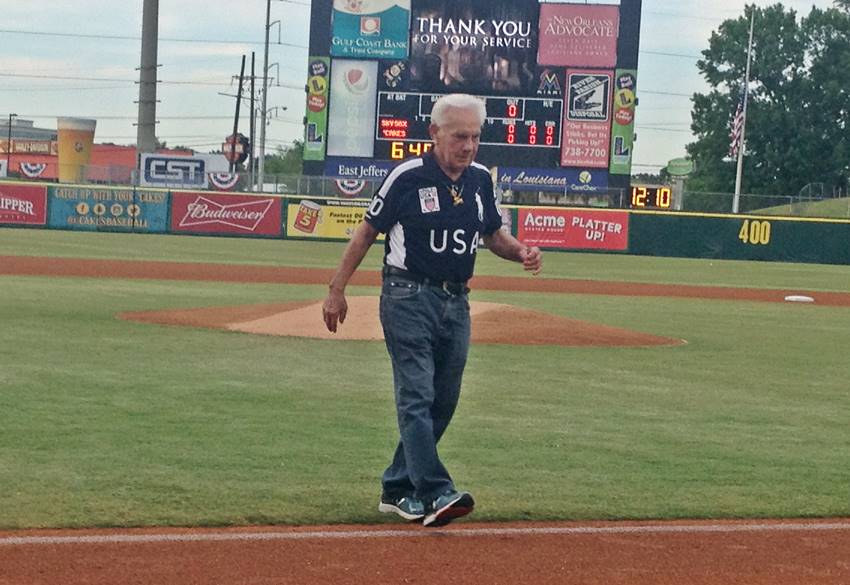 The 1930s, 1940s and 1950s were some of the greatest decades for baseball in New Orleans. The New Orleans Pelicans were the hometown professional team. Prep baseball was in its heyday with teams such as Jesuit, Holy Cross, Fortier, S.J. Peters, and Warren Eastern winning state titles and supplying numerous players to the pro ranks. Local American Legion and All-American Amateur Baseball programs produced several national champions.

Baseball was practically played year-round in the city, with semi-pro leagues providing additional competition in summer and fall seasons.

One of the local area players who experienced first-hand a good portion of this timeframe was Nolan Vicknair. The Marrero native turns 96 years old on April 8. His career included prep and Legion competition in the city, as well as a chance to play in the minor leagues. He later played and coached in various semi-pro baseball and softball leagues. Vicknair still harbors a lot of memories about the era and its ballplayers. He is one of the last remaining connections to those days in New Orleans.

Vicknair considers himself fortunate to have encountered a few of major league baseball’s greats as he pursued his own pro career, but he also played with and against many of the ballplayers who made names for themselves at the local level.

As as a high school sophomore playing with West Bank-based LaRocca’s against Jesuit in an American Legion game, Vicknair remembers when he struck out the first nine batters. Branch Rickey, general manager of the St. Louis Cardinals who was in town for a Pelicans tryout, had attended the Legion game to scout Jesuit players. Impressed with Vicknair’s outing, he recommended the left-handed pitcher consider pro baseball after graduating from high school.

Vicknair says Pelican Stadium was often used by American Legion teams when the Pels were playing out of town. He remembers pitching in the ballpark against a very talented S.J. Peters Legion team that included future professional players George Strickland, Pete Modica, and Red Lavigne. Strickland went on to play in the majors for 10 seasons, whiled Modica and Lavigne both had substantial careers in the minors, including stints with the hometown Pelicans.

Wilson Pollet was pitching in Legion ball when his older brother Howie was a rising pitching star for the St. Louis Cardinals. Wilson and Vicknair played against each other in a Legion contest in which Vicknair recalls hitting a triple off Wilson. He remembers Wilson didn’t throw very hard but had good “junkball” stuff. Wilson later followed his brother in professional baseball but managed to play only one season in the Class D Evangeline League.

Vicknair had to put his baseball ambitions on hold when he enlisted in the Navy in 1943 during World War II as soon as he turned 17. He eventually served on the destroyer USS Bearrs that operated as part of the Pacific Fleet.

After being discharged from the service, Vicknair remembered Branch Rickey’s advice about pursuing professional baseball. Vincent Rizzo, then the business manager for the Pelicans, offered to sign Vicknair after a tryout. But a former teacher at Marrero High School was acquainted with Mel Ott, then the player-manager for the New York Giants who resided in New Orleans. The teacher arranged for Vicknair to meet with Ott, who recommended he go to Fort Smith, Arkansas, for a tryout with the Giants in the spring of 1946.

Vicknair took Ott’s recommendation, reported to Fort Smith, and competed with 150 prospects in a tryout in which 40 players would be selected to make up two minor-league teams. The Giants organization signed him for a salary of $125 per month and assigned him to the Class D Oshkosh Giants in Wisconsin.

Since Vicknair hadn’t played organized baseball for three years, he says he was a bit rusty getting back into the game. At 5’ 6” and 150 pounds, he says he relied on his athleticism, especially his strong arm and speed on the bases and as an outfielder, to be competitive. However, he suffered a broken jaw when a baseball thrown by an infielder hit him in the face while sliding into second base. The injury curtailed his season to just 45 games in which he batted only .193.

He reported to the Giants’ spring training camp in New Jersey in 1947. He remembers getting his paychecks from former Giants all-star pitcher Carl Hubbell, who was then the farm director for the organization. But after being told he was being re-assigned to Oshkosh, Vicknair asked for his release.

He returned to New Orleans and was called by New Iberia Cardinals manager Harry Strohm to join the team, which was part of the Class D Evangeline League and an affiliate of the New Orleans Pelicans. Lenny Yochim, who had been a prep pitching star at Holy Cross High School in New Orleans, was his teammate with New Iberia. Vicknair says that Yochim could “hit the ball mile” in addition to being the team’s best pitcher. Yochim eventually went on to pitch briefly in couple of seasons with the Pittsburgh Pirates in the 1950s and later had a 36-year career as a major-league scout.

Vicknair didn’t enjoy the same success as Yochim. When New Iberia changed managers early in the season, he was released by the team, having hit only .156 in 11 games.

However, his love for baseball didn’t die with his disappointing stint with New Iberia. He played and coached in semi-pro leagues throughout the 1950s and later in city-wide industrial softball leagues.

Vicknair recalls the semi-pro leagues in New Orleans being very competitive. Former professional players and college players would frequently fill roster spots. He says there was often a lot of betting between the better teams. He remembers one game in a Jefferson league in which he made a diving catch in the outfield to save a 2-1 victory, with $500 at stake. He says former Red Sox pitcher Mel Parnell owned a car dealership that sponsored a team in that league, and former Jesuit High School and major-league players Tookie Gilbert and Putsy Caballero played for Parnell. Vicknair remembers the league’s games would sometimes outdraw the Pelicans in attendance.

He played on semi-pro teams with Marrero’s Pete Thomassie, who had successful seasons on several Southern Association teams and reached the Triple-A level with the Chicago White Sox. He remembers Thomassie as having a lot of natural talent, but often had trouble keeping himself in shape. Vicknair played in an all-star benefit game at Mel Ott Park against Gene Freese, who made New Orleans his home after his major-league career. Vicknair was the player-manager for the Mohawks, a popular West Bank team for a number of years, racking up several league championships.

Vicknair recalls a number of good players came through New Orleans to play for the Pelicans on their way to the big leagues. He specifically remembers Tommy Henrich, Frank Thomas, and Danny Murtaugh. One of his favorite Pelicans was Emil Panko, who hit 33 home runs in 1956, although he never got promoted to the majors.

Vicknair competed against Lenny Yochim’s older brother Ray in softball leagues. Like his brother, Ray had a brief major-league career in the St. Louis Cardinals organization. Vicknair remembers Ray would play his heart out in those recreational league games, sometimes playing as many as six games on Sundays. Vicknair was the player-coach for Avondale Shipyards, which had prominent softball teams in city-wide leagues for many years. He played softball well into his 60s.

Three years ago, Vicknair was asked to throw the ceremonial first pitch a New Orleans Baby Cakes game honoring military veterans. Being the dedicated athlete he had been all his life, he practiced some throws at his home to get his arm loose.

Vicknair’s athletic background has served him well into his later years. The active nonagenarian still exercises daily and looks like he could suit up for a game. And he still has fond memories of a celebrated time in New Orleans baseball history.