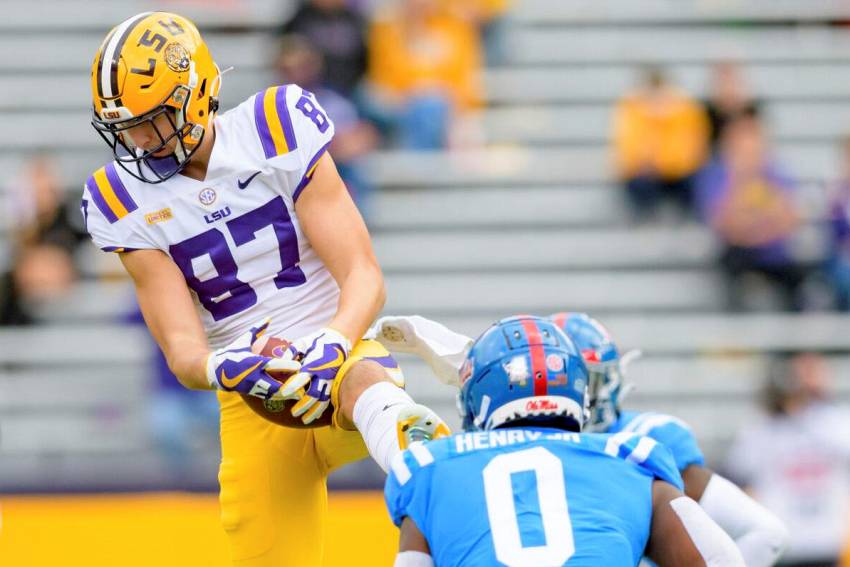 The tight end position at LSU lost perhaps the program’s most highly regarded recruit from the 2020 signing class.

Arik Gilbert opted out late in his freshman season and eventually transferred to Florida.

However, the cupboard is not bare. Being versatile with the ability to block consistently and catch the ball when called upon reliably with be crucial to earning playing time.

No one expected him to see the field but Taylor showed he is a good receiver and does all the little things right. His concentration and route running are reliable and consistent. His size 14 shoe won the game against Florida, of course (with a little help from Marco Wilson)..

Jalen Shead (6-4, 240) out of Olive Branch, Miss was a three-star signee in ’21. Alabama came after him with gusto but he chose LSU. Shead is a raw player who was a defensive end in high school but didn’t play football until his junior year. He is close friends with LSU lineman Xavier Hill, a high school teammate.

Nick Storz (6-6, 262) had shoulder problems chase him from pitcher’s mound at LSU. With Gilbert’s departure, this fierce competitor may force his way onto the gridiron.

Devonta Lee (6-2, 224) is a converted wide receiver who also gained looks as a linebacker. The Amite High alum was teammate of Heisman winner Devonta Smith. This might be his final opportunity to earn snap but he could be a matchup nightmare as evidenced by his physical nature and his 22 touchdown catches as a prepster.

Jack Bech (6-2, 215) is a 2021 signee who I believe will be a great fit as a hybrid receiver/tight end type, much like Gilbert in ’20. His pass catching skills are elite and shined through weekly in his stellar career at St. Thomas More. Uncles Brett and Blain were walk-ons at LSU who ended up playing significant snaps.

A skilled route runner who takes advantage of his size and strength, Jack will quickly show how he can pose mismatches against linebackers and safeties. He is a good blocker as a receiver so how his skills in that area translate to tight end if asked will be intriguing.

Aaron Moffitt (6-2, 252) is a senior who moved from defensive end for added depth.

As you can see, a mix of talents who converted to tight end at some point will battle on the depth chart. Expect Taylor to lead the way as long as he stays healthy.

Click here for LSU roster analysis by position for 2021.