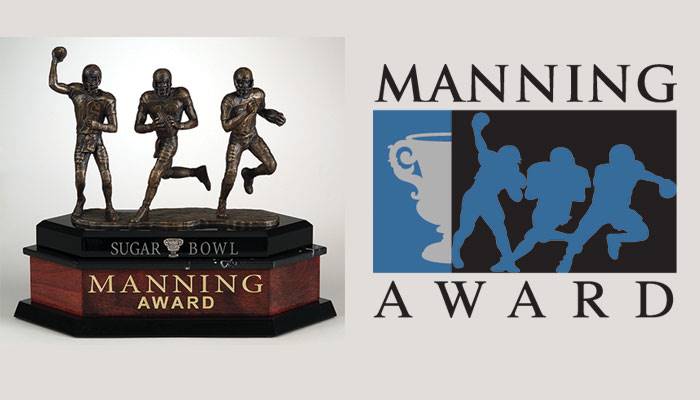 NEW ORLEANS – The Manning Award, sponsored by the Allstate Sugar Bowl, announced its preseason Watch List on Thursday. The list includes 32 of the top quarterbacks in the nation heading into the 2021 season. The winner will again be selected by a voting panel, which includes national media and each of the Mannings, after the bowls.

The Manning Award was created by the Allstate Sugar Bowl in honor of the college football accomplishments of Archie, Peyton and Eli Manning. It is the only quarterback award that includes the candidates’ bowl performances in its balloting.

“We’re really looking forward to a football season that has a little more sense of normalcy this fall,” said Archie Manning. “There’s so much talent among the returning quarterbacks with the super seniors and so many other top players returning. We have 32 outstanding quarterbacks on the preseason Watch List; and I’m expecting the midseason additions to be very impressive as well with a lot of young guys and transfers expected to make major contributions.”

“The Sugar Bowl has considered it a great honor to sponsor the Manning Award for the past 17 years,” said Allstate Sugar Bowl CEO Jeff Hundley.  “After the challenges of the 2020 season, we’re all hoping that these outstanding young quarterbacks will have the opportunity for a more traditional season this year. And after the bowls and the College Football Playoff, we’ll be able to recognize the top quarterback with this honor.”

This year’s Watch List includes players from all 10 Football Bowl Subdivision conferences. The ACC leads the way with five selections, while the Big 12 and the Sun Belt have four each. The AAC, Big Ten, MAC, Pac-12 and the SEC each have three selections.

Statistically, the Manning Award has seen a wide-range of quarterbacks. Fourteen of the Manning Award men threw for over 3,000 yards in their winning campaign, including 4,000-yard seasons from Burrow, Griffin III, Jones, Marcus Mariota, Mayfield, Murray, Ryan, Watson (twice) and Winston. On the other hand, Manziel, Murray, Newton, Watson (in 2015) and Young were all 1,000-yard rushers during their Manning years.

Perhaps most impressive among the statistics of the quarterbacks recognized by the Manning Award is touchdowns scored. Twelve of the winners accounted for over 40 touchdowns during their successful seasons – Burrow’s 65 touchdowns (60 passing, five rushing) broke Mariota’s record (58 in 2014) for touchdowns by a Manning Award winner.

One of the more unique aspects of the Manning Award is the fact that it takes account of the quarterbacks’ bowl performances, in addition to the regular season. Fourteen of the 17 Manning Award winners won bowl games during the season they won the honor. Twelve Manning Award honorees led their teams to the CFP Semifinals or a BCS Championship game appearance (Burrow, Jones, Matt Leinart, Mariota, Mayfield, McCoy, Murray, Newton, Tebow, Watson, Winston and Young). Eight won national championships (Burrow, Jones, Leinart, Newton, Tebow, Watson, Winston and Young).

Previous Manning Award winners have also factored prominently in the NFL Draft as they all heard their names called on Draft Day. Six honorees were selected No. 1 overall (Burrow, Mayfield, Murray, Newton, Russell and Winston), while four others went No. 2 or No. 3 (Griffin, Mariota, Ryan and Young).

In addition to the Manning Award’s yearly honor, each week during the regular season, eight quarterbacks are recognized as Manning Quarterbacks of the Week. Seventy-three players from 66 different schools were honored during the 2020 season and 424 different quarterbacks from 129 schools have been recognized since 2011.