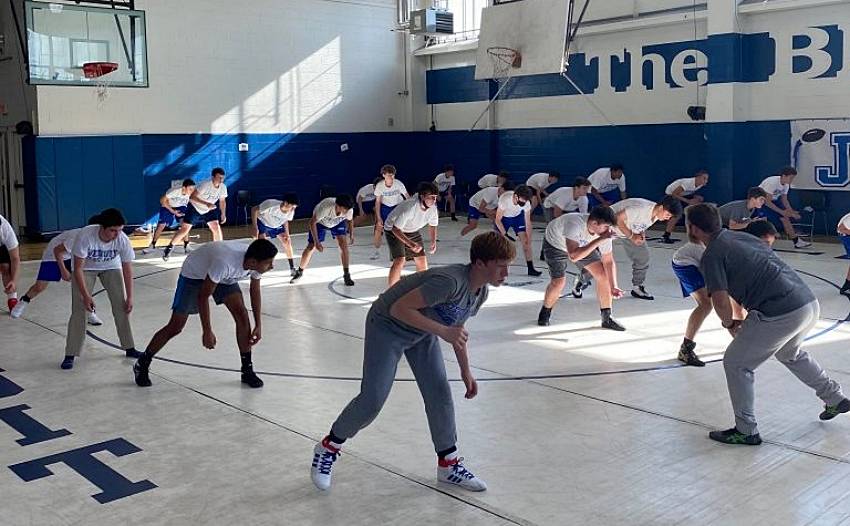 Wrestling success has been treasured for decades on Banks Street in the city of New Orleans.

With 22 all-time team titles, the Jesuit Blue Jays come in second right behind the Holy Cross Tigers with the most state championships in the history of Louisiana wrestling. However, the last time the Jays won a state championship was back in 2009 under head coach Carlos Bertot.

Despite not winning taking top honors, the Blue Jays have stayed consistent at finishing in the top 10 in the top division every year since their last title.

The program will have a new head coach leading them for the upcoming season. Jonathan Orillion, a 2001 graduate of Jesuit, takes over as head coach after serving as an assistant for one year.

Orillion has multiple years of experience in the sport as he brings collegiate experience and an understanding of what is needed for success at Jesuit.

“Biggest thing I want to bring to the table is reminding these athletes about the traditions of the Jesuit program,” Orillion said. “Jesuit was a big part of my life and was a part of molding me into the person I am today. I want these student athletes to know that they are in a place that will both challenge them academically as much as athletically.”

Orillion spent his first years after graduating from Jesuit as an assistant between 2002 to 2008. He stayed in the Catholic League as an assistant coach at Archbishop Rummel from 2010 to 2014. Rummel then promoted Orillion to head coach in 2014 and kept that role until 2017. The Raiders placed in the top five every year under his watch.

In 2018, Orillion decided to go on to the next level and coach at Loras College, a university in Dubuque, Iowa, where he coached Jesuit alum Guy Patron Jr., who earned All-American status for all four years of his collegiate career.

The Blue Jays placed sixth with no individual state champions last year. However, the outlook of the team seems promising with a significant amount of experience returning.

“We have some returning state placers in Dennis Dougherty, John Michael Bourgeois, Chase Haydel, and Spencer Lanosga,” Orillion said. “But, what stands out to me is the number of seniors on the roster. We have 12 seniors and only one of those 12 has reached the podium at state, it’s still a lot of maturity and experience on a team. Each is filling into their own leadership role and I’m excited to see where these seniors can take us next year.”

Last year, Dougherty and Lanosga appeared in the final rounds at the state championships in Baton Rouge.

Dougherty (6-1, 230) and Lanosga (6-2, 285) share notable similarities. The pair of two-sport athletes who play linebacker and defensive line for the Blue Jays in football are big, strong athletes.

Dougherty fell short in the semifinals and wrestled back to capture third place.

Lanosga, an individual who caught many eyes towards the end of last season, was just a freshman but won his way straight to the heavyweight finals.

“It’s great to have multi-sport athletes in the program,” Orillion said. “Dominic Logiudice (195), Dennis Dougherty (220), and Spencer Lanosga (285) are all two-sport athletes with football and wrestling. With their example, we have added many underclassmen who are multi-sport student athletes.

“Dougherty is a leader in all facets of the program. He, in many ways, is the heart of the program. All of our seniors have their own leadership role, but Dennis is the guy that is going to get you fired up. He brings that football mentality to the program and we are benefitting from it. Lanosga is a special young man. Not very often you come across a big guy like Spencer that has wrestled as long as he has wrestled. But, the thing that impressed me the most is his work ethic. His ability comes from the work he puts in.”

The Blue Jays have an alumnus as head coach and dedicated top wrestlers with big match experience to guide the others in the program. Orillion’s charges will look to capture the long-awaited state championship this upcoming season with a talented squad.