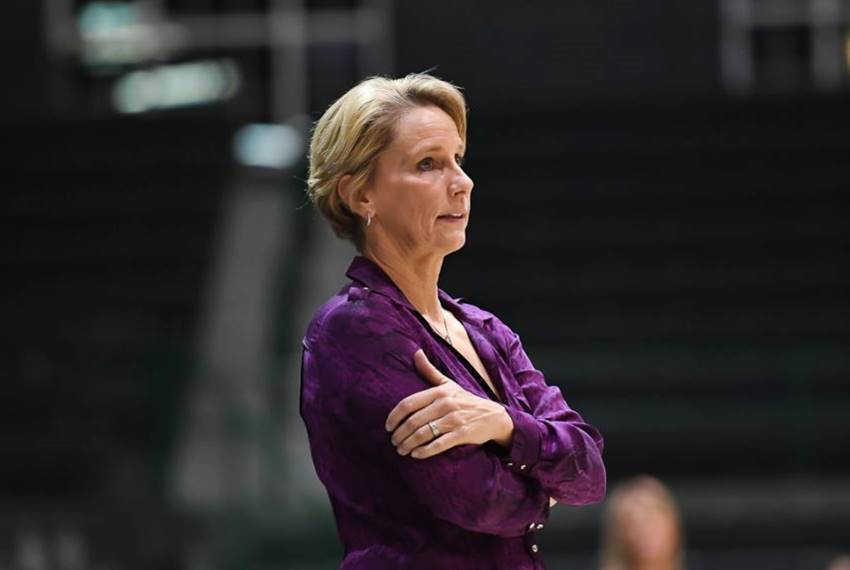 NEW ORLEANS – The Tulane women’s basketball team will open the 2020-21 season on Wednesday, Nov. 25, at Avron B. Fogelman Arena in the Devlin Fieldhouse against Nicholls State. The Green Wave are heading into the season with a veteran-laden team. The roster boasts four seniors and three juniors after finishing fifth in the American last season.

Tulane is coming off a 14-17, 8-8 season where it finished fifth in the American Athletic Conference. The Wave jumped out to the best start in conference play in program history opening league play 6-0. Tulane’s 2020-21 non-conference schedule will feature three teams the Green Wave played last season in Texas Southern, South Alabama and Middle Tennessee State and two new teams, Nicholls and Georgia Tech.

“Last year we lost a lot of close games,” Stockton said. “We won some and we lost some. We had so many close games, win and loss. I think the thing that is good for us, is that when you return a group that has been in the trenches you feel good about what you can do with the season because they have that game experience. Having a veteran team in these circumstances, coming off of last year, is going to be a plus for us. ”

Tulane’s head coach Lisa Stockton will be entering her 27th season with the Green Wave and her 30th season overall as a head coach in the NCAA. She comes into the season with 585 career wins, which ranks 19th among active Division I coaches and leads the AAC.

The Green Wave will open with two games at home against Nicholls (Nov. 25) and Texas Southern (Nov. 27) before hitting the road to face South Alabama (Dec. 1), Georgia Tech (Dec. 3) and Middle Tennessee (Dec. 9).

The conference season will look a little different this year, as the slate will feature a 20-game schedule. The Green Wave will play each team in the AAC twice this year in a home-and-home format. The conference slate will be missing a team, as UConn moved to the Big East this year.

“I look at this as a new day for us, that we can go after and try to win a championship,” Stockton said. “We are probably returning as many people as anyone in the league, so that is good. I think the team is excited. I think it gives you a new focus on what to do. Playing twenty games, I am going back to old school, when I played in the ACC, you played everyone twice. It gives everybody an even shot at everybody and not just the luck of the draw with how the schedule goes. I am really glad we are doing it.”

The Olive and Blue will be led by seniors Krystal Freeman and Arsula Clark, who were the two top players for Tulane last season. Prior to the 2020-21 season, Freeman was tabbed as a unanimous pick for Preseason First Team All-American Athletic Conference, while Clark earned second team honors. The pair were tops on the team in scoring with Freeman adding 15.0 per game and Clark scoring 12.7 per game. Freeman also led the team with 7.7 rebounds per game, while Clark was the team leader with 84 assists and 129 free throws made.

The pair will not be the only offense the Green Wave return because Tulane will have 89.3 percent of its scoring and 95.2 percent of its rebounding from the 2019-20 season on the roster this year. Senior Kaila Anderson returns for the Wave as a leader on and off the court. She was elected captain by her teammates for the third straight season. Senior Sierra Cheatham comes back as the premier shooter for the Green Wave as she made 46 threes last season, which was the most among returning players. Cheatham earned the AAC Ambassador Award in the past two seasons. She was the first player in conference history to take home the award twice.

The junior class also returns big contributors for the Wave. Dynah Jones was named the 2020 Sixth Player of the Year after logging 5.7 points, 2.3 rebounds and 1.4 assists for the Wave last year. Mia Heide will return as the force in the paint for Tulane. She led the team with 56 blocks and ranked second on the team with 6.0 rebounds per game.

The sophomores will feature players that made an impact for the Wave last season and possibly the most improved player on the roster. Irina Parau capitalized on her opportunities in her freshman season as she made eight starts and averaged 4.2 points, 2.8 rebounds and 0.9 assists. She also shot a team-best 75.0 (15-20) percent from the free throw line. Anijah Grant will look to improve on her freshman season.

“Anijah Grant might be one of our most improved players because she played spotty roles at times last year and she is such a good athlete. She can contribute in the paint,” Stockton said.

The freshman class will feature a familiar face for some Green Wave players. Jerkaila Jordan comes to Tulane from John Curtis Christian. She played high school basketball with Dynah Jones and Salma Bates at John Curtis under Tulane alum Barbara Farris. Jordan was the No. 45 ranked recruit nationally and won the 2020 Louisiana Gatorade Player of the Year and the state’s Miss Basketball awards. She took home four straight Louisiana State Championships during her time at John Curtis. Jordan was named the MVP of all four championship games.

Although Stockton has been in Uptown for many years, there have been shake ups in the rest of the coaching staff. Alan Frey returns for his 15th season in Uptown as the associate head coach, but he will be the only returner. Chandra Dorsey joined the staff from Texas State. Olivia Grayson was promoted to the assistant coach position after two years as the assistant director of video coordinator and player personnel with Tulane.

“I think the new staff, obviously Olivia Grayson has been on staff in different roles, but she has definitely stepped in,” Stockton said. “It is great to have an alum and a hall of famer on your staff. She has been tremendous. You add Chandra Dorsey who has tremendous experience everywhere and has brought some new ideas and some energy. I think that has been great.”

Scouting Nicholls
The Nicholls Colonels will come to Uptown tomorrow for the 44th meeting between the two teams. The Green Wave have won 15 straight in the series and hold a 31-12 all-time advantage. The two teams last met in the 2018-19 season with Tulane winning 71-46. The Colonels will open the 2020-21 season against the Green Wave.

Nicholls graduated three seniors from last season’s team that accounted for 56 percent of its scoring last season. Nicholls will welcome eight newcomers in the form of four transfers and four freshman this season. The Colonels ranked ninth in the nation last season with 11.0 steals per game. Nicholls was picked to finish ninth among the 13 teams in the Southland preseason poll.

The Colonels’ top returner is junior Loan-Anah Johnson who scored 10.9 points per game last season. Redshirt sophomore Adrian Mann averaged 10.2 points in nine games prior to receiving a medical redshirt last season. Head coach DoBee Plaisance holds an all-time record of 154-205 record during her time in Thibodaux. She spent three seasons as an assistant at Tulane. Plaisance previously coached at Loyola for 13 seasons, where she amassed a 157-223 record.

The Green Wave will continue the 2020-21 season Friday, Nov. 27, against Texas Southern at 5 p.m. in Avron B. Fogelman Arena in the Devlin Fieldhouse.