Orgeron cements status at LSU as perfect man for the job 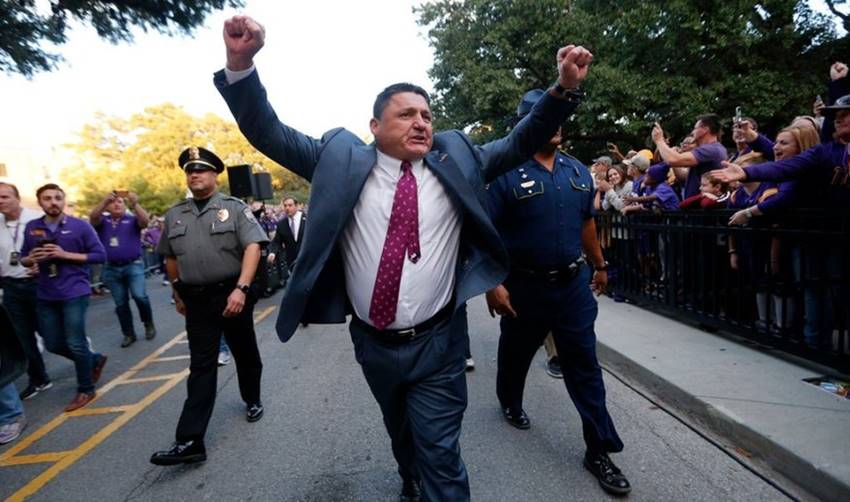 BATON ROUGE – The LSU Tigers put an exclamation point on the end of possibly the greatest regular season in program history with its 50-7 win Saturday night over Texas A&M.

The Tigers’ defense showed up in a big way.

And at the end, smiling as broadly as any fan, there was Ed Orgeron leading his team, his crowd and his state in a chorus of the LSU alma mater.

The game was a statement to the Aggies, who were the winners of last season’s seven-overtime nightmare, and to the members of the College Football Playoff Committee, who dropped the Tigers to number two in their rankings last week.

It was further confirmation that LSU made the correct decision in selecting Orgeron as head coach just over three years ago.

LSU’s flirtations with Tom Herman (24-15 in three seasons at Texas) and Jimbo Fisher (16-9 in two seasons at A&M), now look like a pair of bullets dodged by a program that couldn’t afford to miss the mark after letting Les Miles go.

I mean, come on. If you wrote it as fiction, people would call it contrived.

All “Coach O” has done is win 37 of 46 games (80 percent) since taking over. In each of his three full seasons, the Tigers have increased their win total, improved their national rankings both on the field and on the recruiting trail.

After completing only the third perfect regular season in school history, Orgeron has LSU set up for an extended run of success like it experienced from 2001-2011, when the Tigers had seven top ten finishes to go along with two BCS titles.

But this one would be different in a very special way.

LSU hasn’t had a native son at the helm of the program since Jerry Stovall stepped off the field for the final time in 1983.

In the 36 years since, the program has had its share of respected (Bill Arnsparger, Gerry DiNardo), revered (Nick Saban, Les Miles) and reviled (Curley Hallman, also Nick Saban) head coaches.

However, none has been truly beloved.

It can be tricky when a program hires from within, or searches for coaches with ties to its “glory days.”

Look no further than to Ann Arbor, Michigan, where the Wolverines have not found the success they expected with “Michigan Man” Jim Harbaugh on the sidelines.

Orgeron has been successful because he understands and respects the past, but he doesn’t live in it. He’s proven to be nothing if not adaptable. Whether in assembling his coaching staff or adjusting his own approach to the game, Coach O has proven he belongs among the very best in the game today.

His relationship with his players is genuine. He cares about their success, and in turn he gets more than buy-in. He gets belief.

Kinda hard to hear but Breiden Fehoko told Ed Orgeron “thank you for everything” during the postgame celebration. @breidenfehoko4 pic.twitter.com/8OBHpommi8

If Ed Orgeron can bring a national championship to LSU, he brings it back with a deep and personal understanding of the significance that it carries. “Forever LSU,” isn’t a phrase that he says, it’s the way that he lives.

Born on the Bayou is playing and Ed Orgeron is upper cutting air. Fill my veins. pic.twitter.com/9VRFo12qXQ

“Louisiana is very proud of LSU football,” said Orgeron. People in Louisiana have heart, man. When they love you, they love you.”

Coach O was talking about the reception that fans have given to Burrow, who should claim the second Heisman Trophy in LSU’s history next month, but that love extends beyond the young man wearing the #9 jersey.

Burrow’s time at LSU is nearing its end, while Orgeron’s has really just begun.